I had an incredible pleasure (and honor) to curate R-Ladies' Twitter account this week. To make it short: It’s been a blast and a fantastic experience that I can only recommend!

If you are interested, there are multiple posts that I all read beforehand about what it is like to be a curator (for instance by Nicola Rennie, Shannon Pileggi or Divya Seernani). They are great blog posts with a depth of collected knowledge and perspectives in them.

How do I become a curator?

But let’s start from the beginning ⭐ It’s easy and everyone can become a curator who meets the requirements described here. You can either be nominated or sign up by yourself - just hop over to the R-Ladies RoCur Guide where you find all the information and the sign-up info.

How do I prepare?

Thinking about topics and preparing tweets

This definitely depends on your personality and your time flexibility. I knew that my work weeks would be probably really busy which leaves me with little time for other things (and preparing good tweets takes time for me) and I also like to have things sorted beforehand. Otherwise, I always feel like I am forgetting the cool things and only remember them when it’s too late.

So I sat down once I knew I was curating and started making a sketch. I roughly knew what I wanted to talk about (function programming, debugging, package development, and git because they are so helpful but often put people off) and also some other helpful add-ons such as Shiny and NLP. I allocated days for each topic and thought about a rough outline: 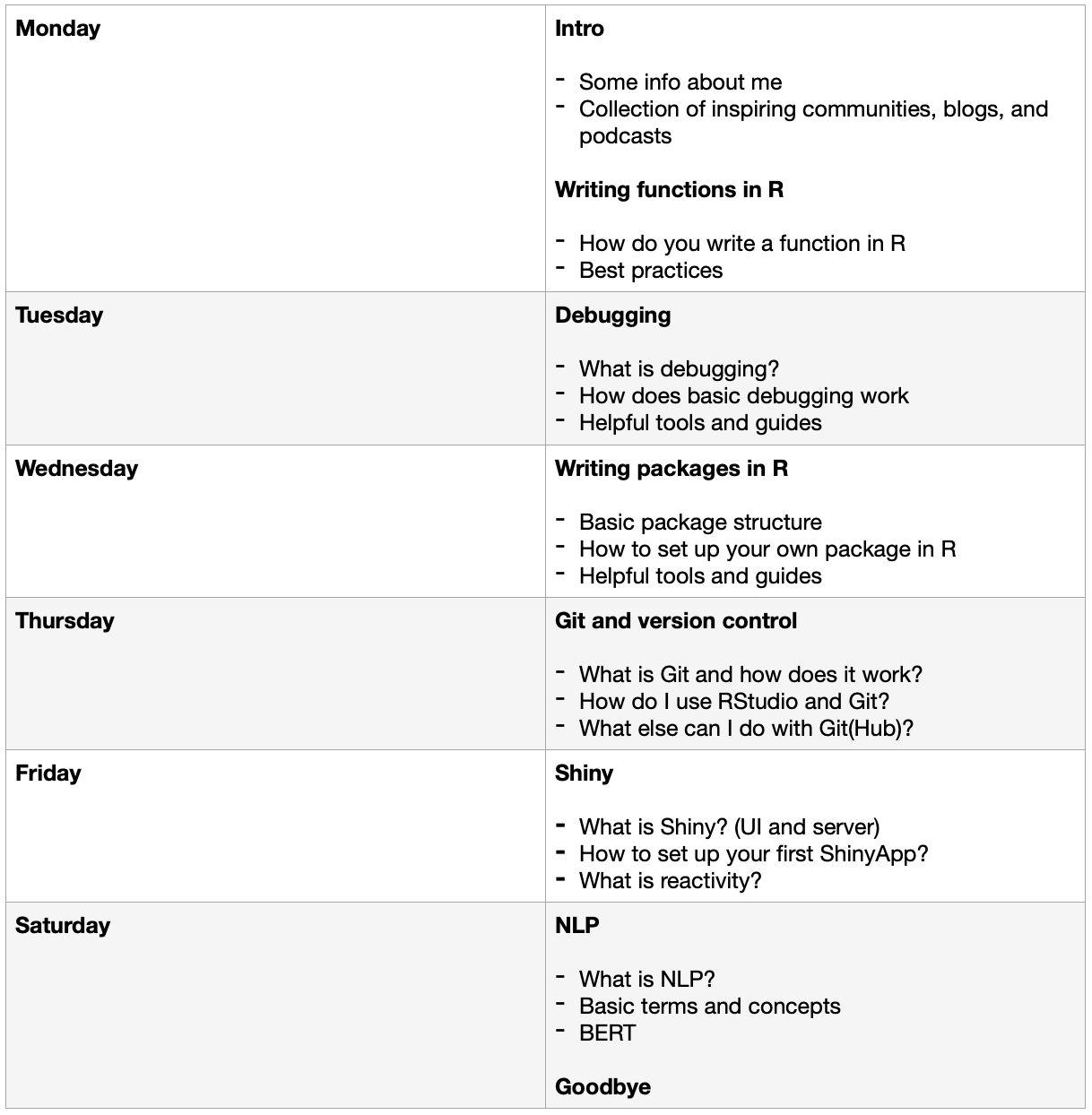 I enjoy writing blog posts, so I also started writing my tweets like blog posts on my computer (it brings me into the writing mode. I used NotePlan but any other program works as well). 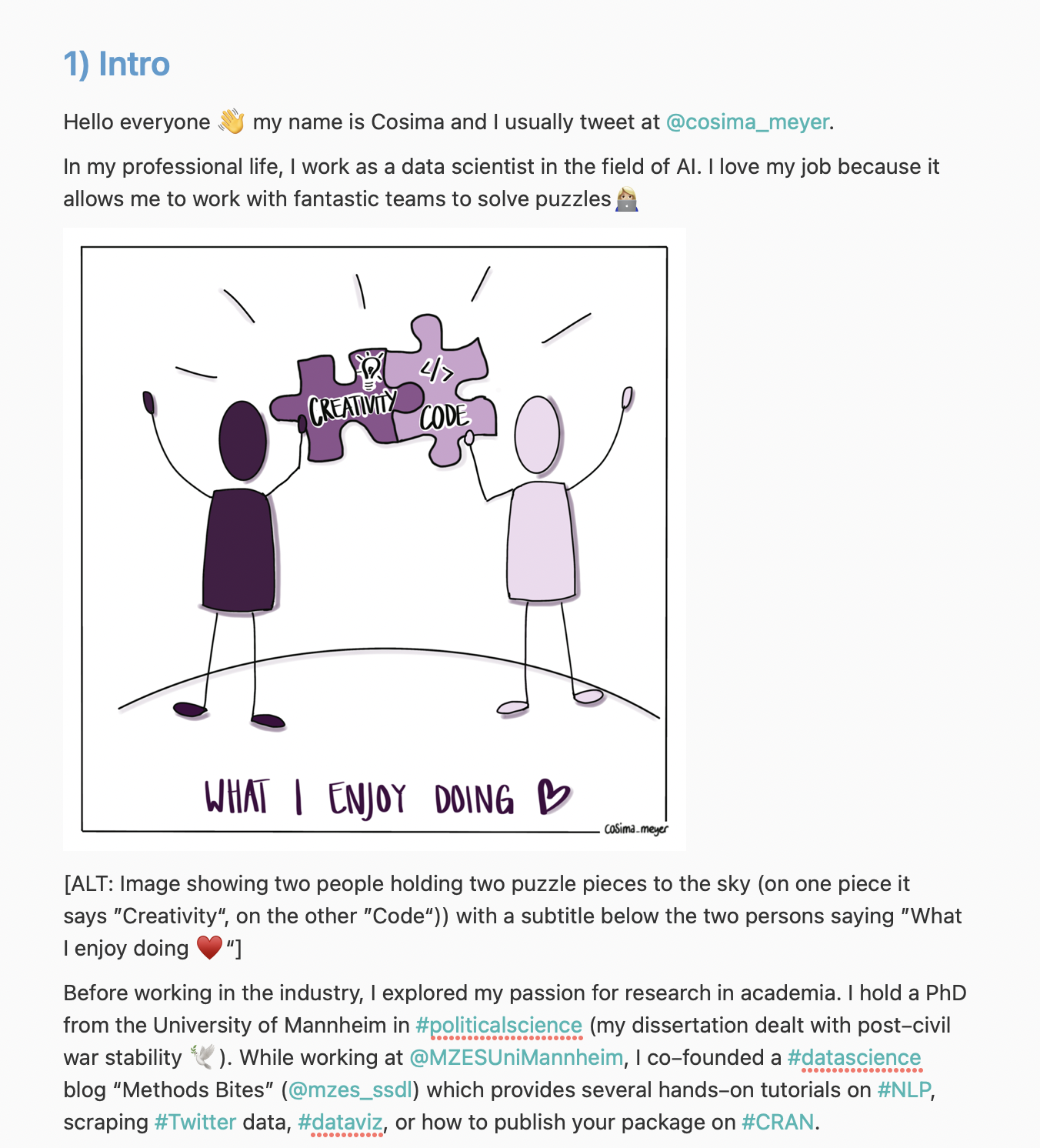 I also used this time to already prepare all the alternative texts for the visualizations and verbose text for the GIFs.

Although I planned to keep last-minute changes to a minimum, it didn’t work out and I ended up tweaking and adding new things just before tweeting it because it felt was better this way - but I guess that’s normal. This way, we got to these shortcuts in RStudio:

Before we get into 📦 development, I wanted to share my favorite shortcuts in the RStudio IDE with you. There are so many out there (https://t.co/qR1L7n3B29) but these are the ones that I regularly use when changing something directly in my code 😊 #rstats

Great question! It's difficult to give a generic answer here because I feel giving a more complex function (even with lots of comments) wouldn't give the intuition of writing it. It is like a flower that blooms - you start simple and add more and more parts to it (like petals) 🌸

If you are curious about what ended up being my content, here’s an amazing summary by Pilar Elizalde:

The great @cosima_meyer is curating the @WeAreRLadies account for the @RLadiesGlobal community #RLadies this week and she's been doing an amazing service posting the most helpful threads: clear, concise, and with superb visuals! 🙌🙌

Turning the text into tweets

Before tweeting a Twitter thread, you have to turn them into single tweets. I relied on Chirr App and it worked really well! Just copy-paste your tweet and if you want a forced tweet break add [...]. I then copy-pasted the tweets on the right side, added my images, GIFs, and alternative texts, and tweeted them 🎉

I didn’t actually plan it but I ended up having a poll for almost every day (I love answering them - that’s probably my social science background 🤓) and I think they are great to interact with others.

Today @WeAreRLadies it's about one of the most powerful tools in your workflow: #git (and also GitHub as a hosting platform) 🤓

What do you use Git(Hub) mainly for?

If you have interesting repositories to share, other use cases, or use all of them, put them in the comments 👇

When thinking back to when I learned most, it almost always involves some kind of visual cue. That’s why I tried to add as many images or illustrations as possible and also used GIFs to show interactive behavior. To create the GIFs, I used the screen recording (that comes as a default program on a Mac and you can activate it using Cmd + Shift + 5) and converted the .mov files into .gif files using Convertio.

To visualize code, I relied on the code snippets output by carbon.now.sh where you copy-paste your code, choose a nice theme, and export it as a .png file.

I also tried to prepare an infographic for each day to briefly summarize what I tweeted about. I used Procreate to create them, added a bit of my flavor to them, and also colored them in R-Ladies' corporate design. If you want access to them, they are here for you to use (both as a PDF and PNG). 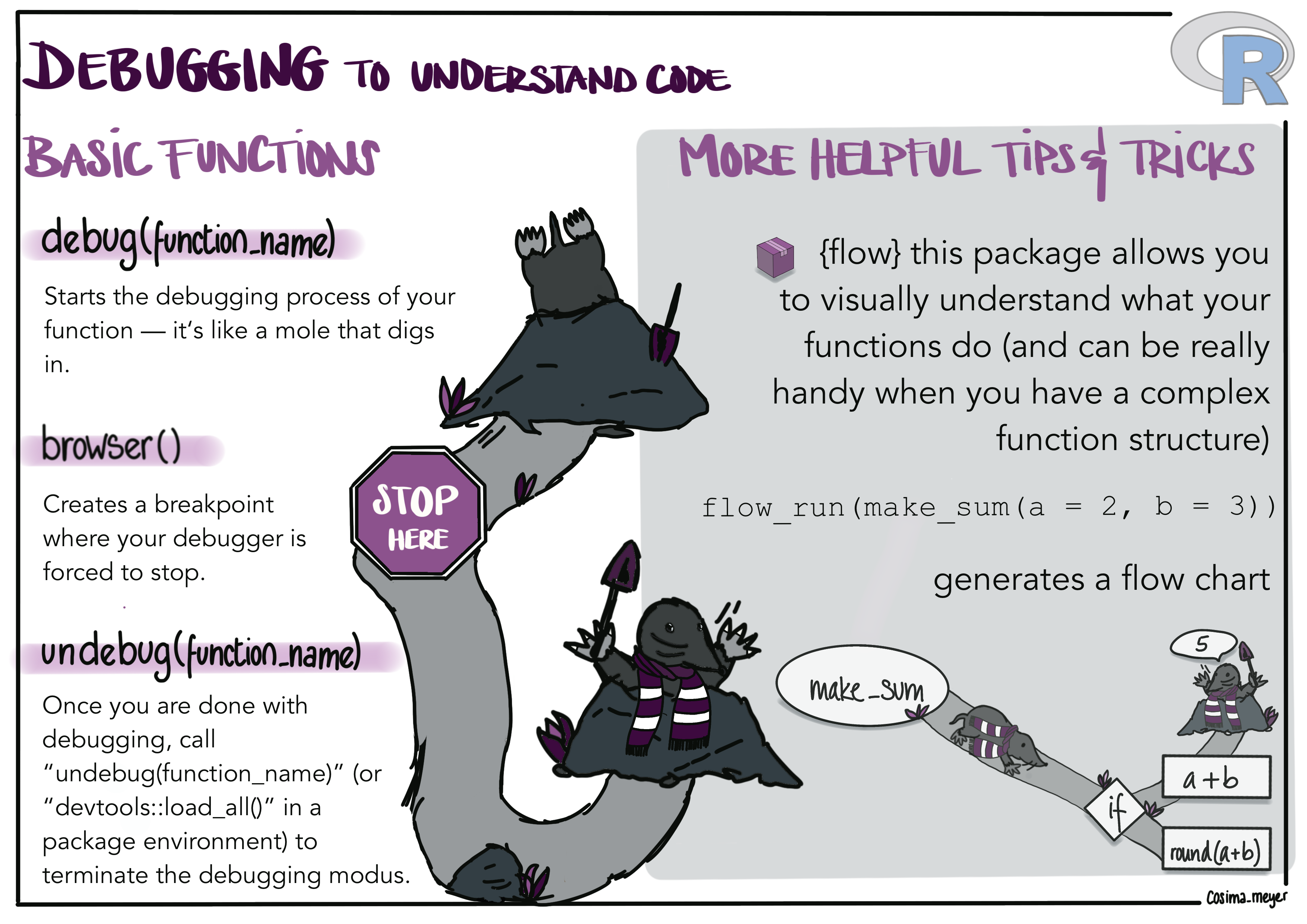 How do I tweet aka how does TweetDeck work?

TweetDeck can be a challenge - and I heard many stories about what can go wrong. So I googled alternatives beforehand and someone in the R-Ladies community recommended the plugin BetterTweetDeck - and this worked quite well! So all my experience is based on the use of BetterTweetDeck. Things that are different from Twitter:

But there are some cool things: 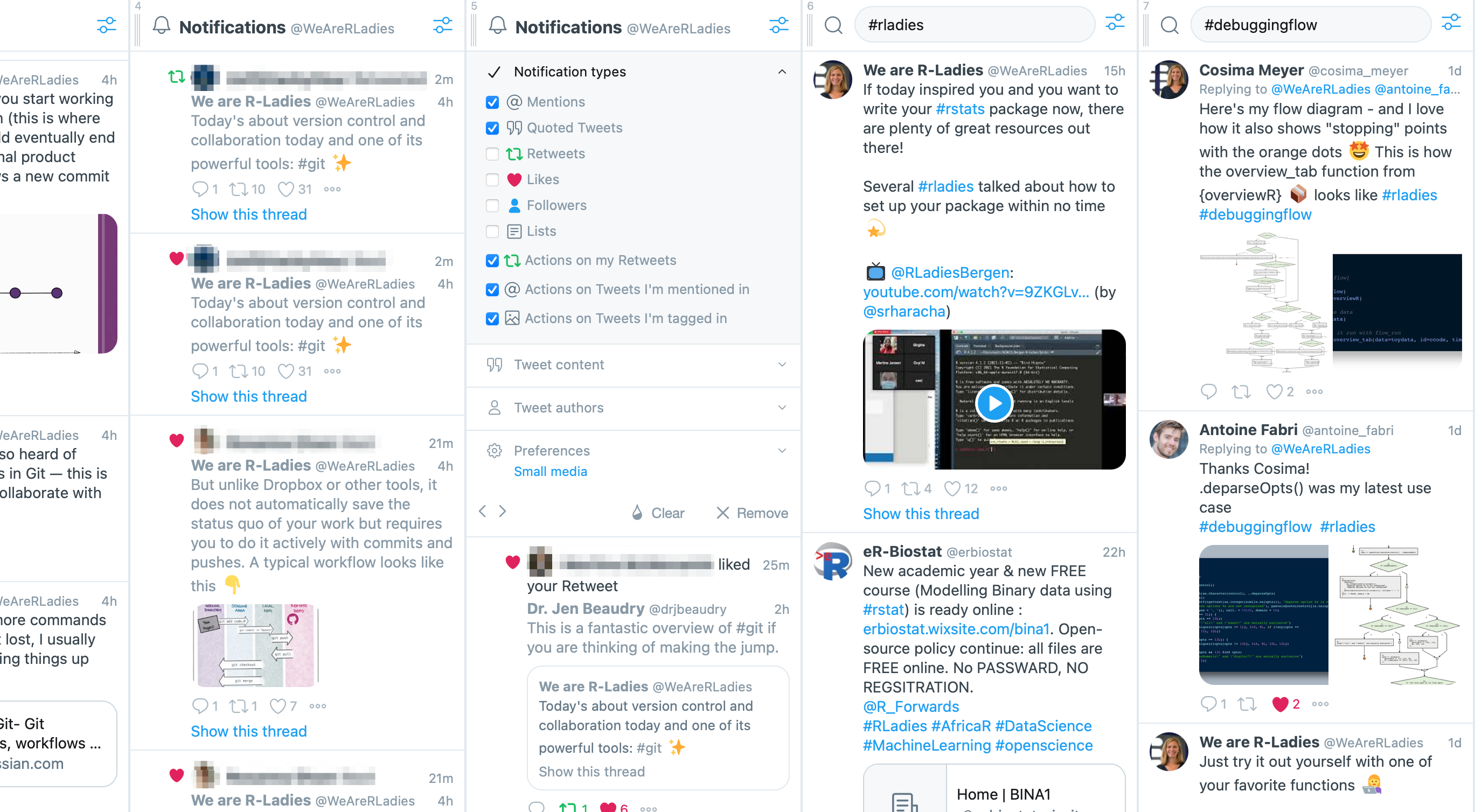 So, if you want to get retweeted and future @WeAreRLadies curators have a similar setup as I had, it’s best to tag your tweet with #rladies because it’s difficult to find specific accounts on TweetDeck.

Prior to curating R-Ladies, I did some trial runs with the BetterTweetDeck and would also recommend doing it if you have never used it before. It definitely helps to understand how things work.

Things that I learned (and also hoped for)